The BCR-ABL1 gene and its messenger RNA, the Protein Tyrosine Kinase Bcr-Abl1

Chromosomes are found in a cell’s nucleus and are made up of tightly wound stretches of DNA, the genetic code essential for the life of a cell and therefore the life of an individual.

The nucleus is a protected environment meaning nothing can get inside it and DNA cannot move outside of it. In order to deliver instructions (as a code) for a myriad of cell processes, short stretches of DNA are duplicated as molecules known as RNAs, of which there are several forms. The RNA we are interested in is messenger RNA or mRNA.

mRNA travels outside the nucleus into the cell cytoplasm where protein tyrosine kinases are then formed. Proteins express signals, setting in motion a variety of cell processes including cell division, proliferation and death - a mechanism known as apoptosis.

In CML the BCR-ABL1 gene duplicates its coded instruction as a messenger RNA (mRNA). In this form the DNA code can move outside of the nucleus and into the cytoplasm where the protein Bcr-Abl1 signals the Ph+ cells to continue to divide in a disregulated (leukaemic) manner. 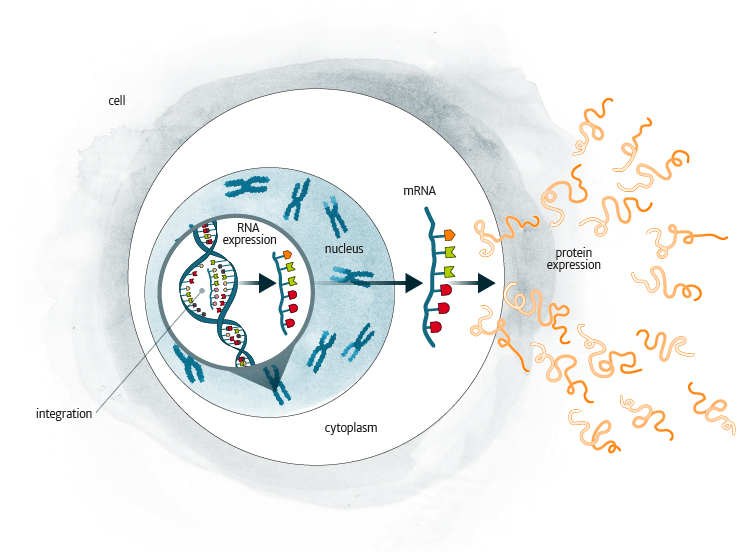 Tyrosine kinase inhibitors (TKIs) target the abnormal protein Bcr-Abl1, which effectively blocks the signal for continued Ph+ cell division. This reduces the abnormal Ph+ cell population to very low (molecular) levels along with a reduction in the clinical manifestations of CML.

Continued TKI therapy is highly effective in controlling Ph+CML over the long term, allowing the majority of patients to live a normal life-span near to or the same as the 'normal' population.